How are polyclonal antibodies generated?

The quality and quantity of the antigen used directly affect the immune response. Even small amounts of impurities will cause the antibodies to react more to the impurity than to the desired antigen. Too little or too much antigen can cause sensitization, suppression, or other unwarranted immunomodulatory effects. Therefore, antigen purification is a crucial process to achieve higher antibody specificity.

The antigen must be prepared under sterile conditions to ensure that it is free from endotoxins. The amount of antigen depends on several factors, such as the properties of the particular antigen, the animal species chosen, the route of injection, the frequency of injection, and the level of purity of the antigen.

Factors that influence the choice of animal species are the amount of pAb required, the phylogenetic relationship between the animal and the antigen, the age of the animal, the ease of obtaining blood samples, and the application in which the pAb is used.

Animal species commonly used in the laboratory are rabbits, rats, mice, guinea pigs, hamsters, goats, chickens, and sheep. Rabbits are preferred due to their size and relatively long lifespan. However, to produce higher amounts of pAbs, farm animals such as goats, sheep, and horses are used.

The immunization protocol differs for different animal species. Adjuvants are compounds that are used as a form of boost in cases where the induced immune response would otherwise be inadequate. The most widely used adjuvant for the production of pAbs is Freund’s complete adjuvant (FCA).

FCA induces high antibody titers against most types of antigens. However, care must be taken that FCA is not over-administered. FCA use should be limited to one-time use, as FCA can cause serious tissue damage. 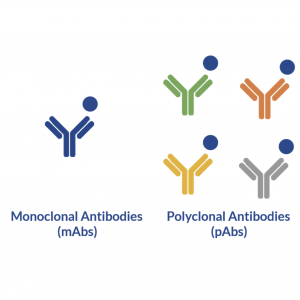 The smallest volume of an antigen capable of inducing an effective immune response is injected into the animal. However, the route of injection depends on the nature of the antigen and the animal used. The antigen can be injected as a single volume or several low volumes at different sites.

Animals are monitored daily for side effects of immunization and bled at regular intervals. Serum from animals is tested to monitor antibody responses and extract antibodies when a sufficient amount is produced.

This is a relatively inexpensive process and can be used to isolate large quantities of an antibody in a single extraction. PAbs are a heterogeneous mixture of antibodies that can bind to a wide range of antigenic epitopes. Therefore, a small change in the epitopes of an antigen is less likely to affect pAbs. These antibodies are very stable over a wide range of salt concentrations and pH values.

The affinity of pAbs for antigens can change over time, leading to a lot of lot-to-lot variabilities. Furthermore, the amount of pAbs produced is limited by the size and lifespan of the animal. The purity and concentration levels of a specific antibody are lower in pAbs than in monoclonal antibodies. 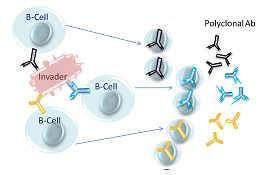 How are polyclonal antibodies used?

pAbs have a wide range of applications, including diagnostic tests and qualitative and quantitative biological analyses. For example, pAbs are used in immunofluorescence and immunohistochemical techniques such as sandwich ELISAs to detect tumour markers and other proteins of interest.

pAbs are also used for mediating or modulating purposes, such as in immunotherapy, active signalling, or neutralizing activities. An example of this is the use of pAbs in the treatment of Digoxin Immune Fab in fatal digoxin toxicity.

pAbs such as Rho (D) immunoglobulin are injected into mothers with negative Rhesus blood group to prevent hemolytic disease in a newborn. Rho (D) is produced from a pool of human plasma collected from Rhesus negative donors who have antibodies against the D antigen (present on red blood cells).

pAbs also find applications in histopathological analyzes employing immunoperoxidase staining. In addition to these applications, pAbs are used in immunoaffinity purification for the purification or enrichment of antigens.

Recombinant pAbs are used in cancer therapy due to their ability to target multiple tumour cells compared to monoclonal antibodies. Although monoclonal antibodies are widely used in cancer therapy, relapse is common due to the appearance of tumour cells that are resistant to the antibody. By using pAbs, various recombinant antibodies can be developed that cross-react with different types of cancer.

The way forward shows the use of recombinant pAbs to minimize unnecessary polyreactivity as seen when using traditional pAbs. The use of pAbs in different assays not only leads to high throughput but can also be used to develop antibodies specific for human gene products that are also renewable.